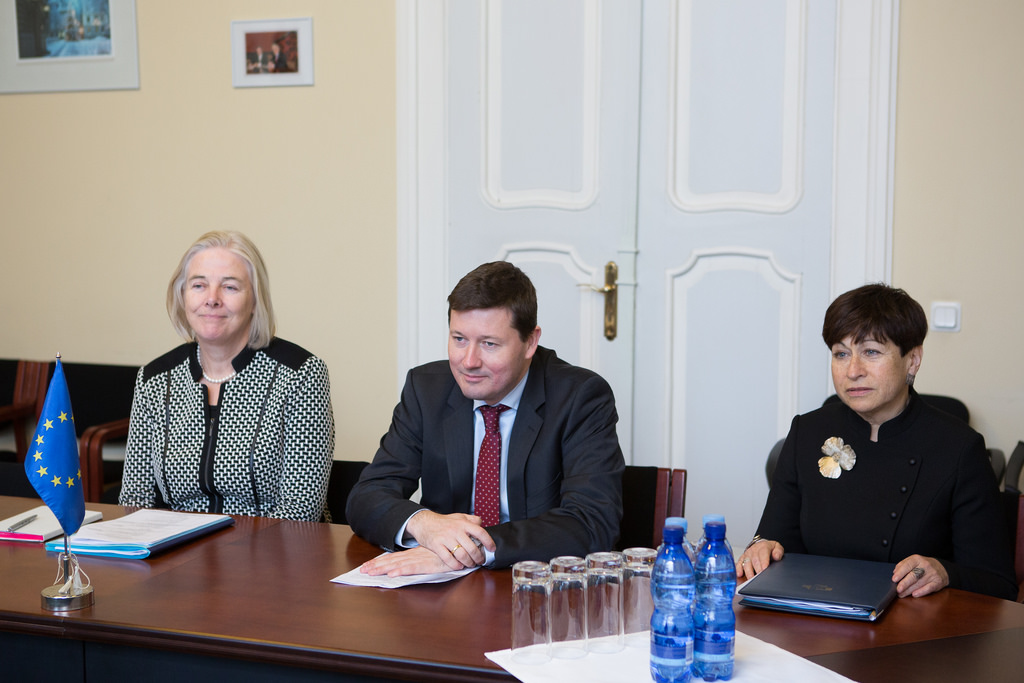 The way how Martin Selmayr (center in the picture) was appointed puts the European institutions into disrespect. If this procedure was corresponding to the rules, the rules have to be changed. Not only in the Commission also in the Parliament open tenders should be used without exemptions. All positions should go to the best qualified not to the best connected. Until the investigation of the Selmayr’s promotion is not completed, we demand to postpone the discharge of Commission’s budget.

On the demand of the Greens/EFA group the plenary of the European Parliament will discuss the Martin Selmayr’s appointment on Monday at about 5 pm. The debate can be viewed live here: http://www.europarl.europa.eu/ep-live/en/schedule

On 21 February, the college of Commissioners appointed Mr Martin Selmayr as deputy secretary general. To the surprise of the vast majority of the college, Alexander Italianer resigned. Within minutes, secondly, the college appointed Selmayr as Secretary General to fill the sudden vacancy. The press spokespersons of Commission do not refute that Jean-Claude Juncker know Alexander Italiener’s intention to resign 2,5 years in advance, Selmayr at least since Christmas, and Günter Oettinger at least since the day before. The other 26 Commissioners were not aware of the intentions in advance. In the case of Mr Selmayr’s second appointment to Secretary General, the urgency, therefore, was deliberately created by the Commission President Jean-Claude Juncker.

The Greens defend the European Democracy and integrity of our EU institutions. EU Commission and European Parliament are already more transparent and have better integrity rules than many national institutions of Member States. And so far, the procedure to appoint Mr Selmayr was not found to violate any rules, as many rules exempt the highest ranks from using usual procedures. The highly unusual procedure in this case threatens to negatively effect the integrity of procedures in EU institutions. If such threat is possible within the rules, we have to change our rules. Staff regulations for EU officials, decided by Parliament and Council on the proposal of Commission, have to follow the principles of EU treaties. The principles of transparency, of equal access to positions and the collective responsibility of the college of Commissioners should be fully realised by staff regulations. Lessons learned from the Selmayr case should inform a necessary update. The position of Secretary General is of particular importance. The secretariat general draws up the Commission’s work programme, coordinates the reviews of impact assessments for proposed legislation, looks after the Commission’s transparency register and it polices the code of conduct for commissioners. Therefore, a Secretary General’s reputation should always be beyond any doubt.

We ask for a five point plan:

regulation 31 (EEC), 11 (EAEC) laying down the Staff Regulations of Officials

No appointment or promotion shall be made for any purpose other than that of filling a vacant post as provided in these Staff Regulations.

Vacant posts in an institution shall be notified to the staff of that institution once the appointing authority decides that the vacancy is to be filled.

If the vacancy cannot be filled by transfer, appointment to a post in accordance with Article 45a or promotion, it shall be notified to the staff of the other institutions, and/or an internal competition shall be organised.

(a) whether the post can be filled by:
(i) transfer, or
(ii) appointment in accordance with Article 45a, or
(iii) promotion

within the institution;
(b) whether requests for transfer have been received from officials of the same grade in other institutions, and/or
(c) if it was not possible to fill the vacant post through the possibilities mentioned in points (a) and (b), whether to consider lists of suitable candidates within the meaning of Article 30, where appropriate, taking into account the relevant provisions concerning suitable candidates in Annex III and/or
(d) whether to hold a competition internal to the institution, which shall be open only to officials and temporary staff as defined in Article 2 of the Conditions of Employment of Other Servants of the European Union;

The procedure may likewise be followed for the purpose of constituting a reserve for future recruitment.

According to the Commission budget 2018 there are:

Not counting the possible scheduled and unscheduled promotions during the year. In addition, there are other high level posts in the agencies and other bodies outside the European Commission itself.

AD 16 concerns Directors-General, Secretaries-General and their predecessors. If they have not yet retired, but continue to work as special advisors or heads of an EU delegation (quasi ambassadors), for example, they take their rank with them.

Directors are the hierarchy level below the general directors and correspond to a head of department (in DE “Abteilungsleiter” or “Haupt-Abteilungsleiter”) in a national ministry. A Directorate-General in the COM consists of 2-8 Directorates, which are led accordingly by Directors with, as a rule, grade AD 14, who can then be promoted up to AD 15.

The three levels AD 16,15 and 14 are particularly emphasized, since ordinary EU officials cannot achieve them through length of service, age or normal promotion. Normal promotion used to end with AD 13 and nowadays with AD 12, but higher promotion is only possible if you have a management function, i. e. Head of unit (maximum up to AD 14), Director (up to AD 15), Director General or Secretary General (up to AD 16).