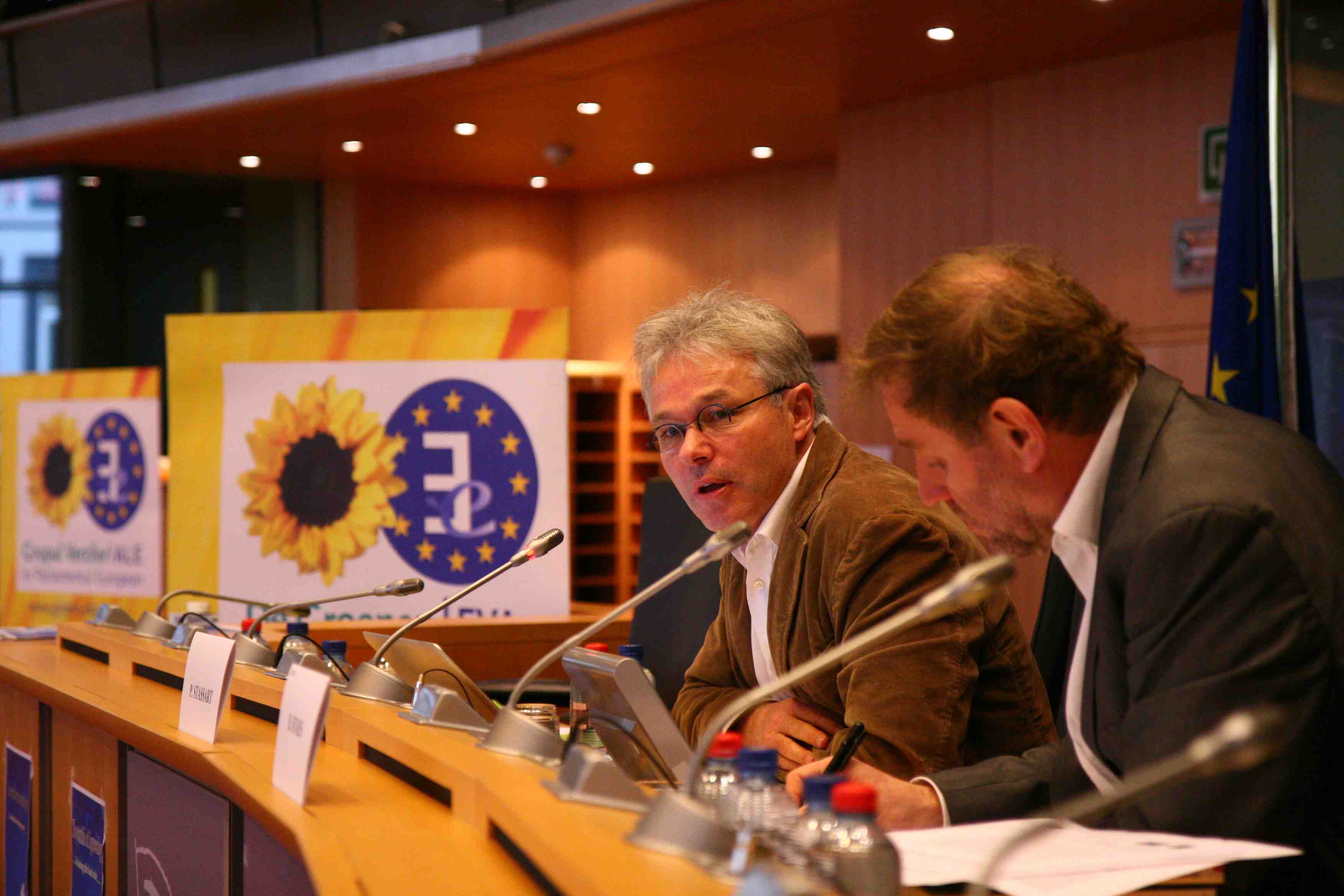 This is the essence of his contribution (and you can find the powerpoint presentation here).

Agroecology in Europe is associated with a whole social history.
At the time when I was asked to write a PhD I had no idea what I was really doing. Even today an explanatory framework in which many (agriculture) students are active is all too often lacking.

For example, Europe has a centuries-old tradition of landscape agriculture. The point is not to limit yourself to the parcel but to look at the entire field, at the landscape. If we change the scale, then we will also start to ask questions with a different meaning.

After graduating, I started to travel. To Coprosain in Wallonia. I saw a poster there of the Belgian Blue race, the Belgian race. I wondered how this cow related to agriculture. At the time mad cow’s disease was rampant.
Cows no longer are herbivores, or carnivores for that matter. They have become cannibals! I started to wonder about the relationship between food and the methods used to produce it. The system was experiencing a crisis after all.

The big question was: is the system still reversible? Or should we completely demolish and rebuild it?
These practices have always been associated with very powerful corporations.
So we need to break their power.

Organic farming prides itself on a long tradition (permaculture, biodynamic farming and so on). It is also a social organisation. There is something specific about agroecology, i.e. the fact that it establishes a contact between science (which often treats organic farming rather shabbily) with the agroecological practice and the social movement.

In 1997 I found myself in Cordoba. There I met Sevilla Guzmann, the founder of the agroecological movement. He spoke to me about another type of agriculture, a political agroecology. It crystallises two things: the criticism and the proposal. This was new, especially in the world of science.
Guzmann spoke about 'integrated development', about the 'co-evolution between nature and society', 'the development of local and regional markets', ‘the importance of local knowledge and know-how’. There is a struggle going on at the level of the autonomy, the inequality and the desire for sustainable production.
That is where the amalgam of the social and the scientific aspects was created.
In 2004 Guzmann was the first to publish a magazine on agroecology. He is also a driving force in Latin America.

Another element is participatory certification. This is a criticism of conventional certifications, as an instrument of market globalisation. It is also a proposal to recognise a way of life, a production method of a given method.

Does the institutionalisation of agroecology undermine its character?
Is AE just another way of agronomists to ‘update’ their field or does this approach combine various disciplines? And does this mean we need to evolve towards some sort of participatory research? The major research institutions have a capacity which we consider to be interesting. The work of INRA is quite useful, which says: there are different ways to do things.

While it is true that the number of people who need to be fed is growing, but increasing the production is perhaps not the right way to go about it. We also need to look at the consumption of food, and how we can limit the damage and the costs.

We need to be careful about proliferating the concept: will we weaken agroecology or will we translate/strengthen it? For example, what does eco-functional intensification mean?
Should we not change our production methods?
TP Organic, IFOAM and Via Campesina are thinking about what agro-ecology is or should be.

In the framework of our own GIRAF group we are currently reflecting on the political aspect of agroecology:
- acknowledging and making use of the diversity in terms of knowledge, skills and practices (local, traditional) – Comté AOC for example. All the brand suppliers have to live in a 25-km radius around the factory. (this prevents concentration and monopolisation).
- Collective capacity of networks (producers, consumers, researchers, administration and technical advisors)
- Autonomy vis-à-vis the market as a whole.

The state of the soil for example is an important element for farmers but also for the surrounding residents.
The issue of seeds is also important. It’s all about diversity.

Conclusions
Nobody has a monopoly on agroecology.
Agroecology is very heterogeneous. This requires a certain level of meticulous local research. So we need to work bottom up as well as top down.

BIOGRAPHY
Pierre Stassart is an environmental sociologist with a background as an Agricultural Engineer (1983). After working as a professional in the NGO development sector in Africa (1986) he moved to the Foundation Universitaire Luxembourgeoise where he obtained a Phd in environmental sciences (2002). He lectures in "Sustainability Transitions Studies" at the Department of Environmental Sciences and Management at Liège Université, Campus d'Aron (B) and in "Food Systems Studies" at the Catholic University of Louvain-La-Neuve (Belgium). For over fifteen years his main research has focused on food system transitions toward sustainable development with a special focus on the design of participatory research and interdisciplinary research devices. His current subjects are stock farming, soil conservation agriculture, peasant seeds and participatory certification. He is the secretary of the Belgian agroecology group GIRAF which he co-founded in 2009 with Philippe Baret and Gaëtan Vanloqueren.
www.agroecologie.be. His publications are available here