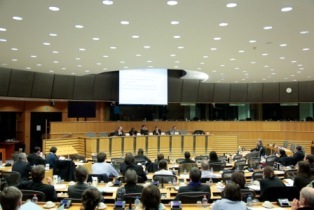 The Smoke Free Partnership is a strategic, independent and flexible partnership between Cancer Research UK, the European Heart Network, the European Respiratory Society and the Institut National du Cancer. It aims to promote tobacco control advocacy and policy research at EU and national levels in collaboration with other EU health organisations and EU tobacco control networks.


Why this seminar now?

The World Health Organisation’s Framework Convention on Tobacco Control (FCTC) is the world’s first international public health treaty, which officially entered into force in February 2005. As of today, the FCTC has been ratified by 168 Parties, including the European Union and all but one EU Member State. The treaty sets out broad, legally binding objectives and principles aiming at protection from the devastating effects of tobacco consumption and exposure to tobacco smoke. Article 15 commits the Parties to take action against the illicit trade of tobacco products.

However, as the Treaty only sets out general objectives and principles, further work is needed in order to develop more specific commitments and provide clear guidance for implementation of this Article. The Illicit Trade Protocol (ITP) is the first subsidiary treaty to be negotiated under the FCTC. There have so far been three Intergovernmental Negotiating Body (INB) meetings to negotiate the Protocol text. The last

INB meeting is scheduled for March 2010 in Geneva. A successful INB4 is essential for the Protocol to become a reality.

Objective of the seminar

The Smoke Free Partnership organised this event in close collaboration with Luk Joossens, an international expert on the illicit tobacco trade. The objective of the seminar was to provide an outline of the crucial discussions that will take place at INB4 in Geneva, with specific reference to the problems in Africa, and to discuss how the EU can impact on the negotiations.

The fifth and sixth issues in the ‘Spotlight on the FCTC’ series, which cover tobacco and development policy and the illicit tobacco trade respectively, were launched. A special thanks to Margarida Silva and Ian Willmore who drafted these spotlights.

The seminar brought together 70 participants including Members of the European Parliament, senior officials from the European Commission, representatives from the Member States, and public health and tobacco experts. 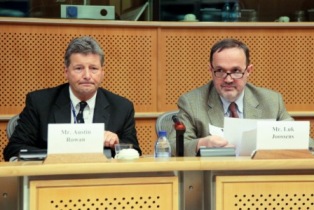 In his introductory remarks, Bart Staes MEP described his experiences of working in the fields of development and financial resources through his role as Vice-Chairman of the Committee on Budgetary Control in the European Parliament and as the Parliament’s rapporteur on the agreements with the tobacco industry. He explained the involvement of the European Parliament, through the Committee of Inquiry into the Community Transit System, which looked at cigarette smuggling in 1996. He complimented OLAF for its excellent work in the fight against the illicit cigarette trade and gave a special welcome to Dr. Anibueze as one of the key negotiators on the Protocol from the AFRO region.

In his presentation, Luk Joossens, an expert on the illicit tobacco trade, talked about the massive global scale of the problem, and how the burden of the illicit tobacco trade mainly falls on middle and low income countries. He discussed the varying factors affecting the levels of smuggling across the different regions of the world, namely the presence of organized crime networks, the presence of informal distribution networks, the level of corruption, the likelihood of getting caught and prosecuted, the level of penalties and industry participation.

There was also a discussion of the serious affects of the illicit tobacco trade, both from a health and a financial perspective. It was explained that the illicit trade of tobacco products robs governments of significant tax revenues, but also increases the availability of cheap cigarettes, thereby increasing consumption. Almost 12% of the global cigarette market is illicit, which is equivalent to 657 billion cigarettes a year and $40.5 billion in lost revenue.

Ian Willmore of the Framework Convention Alliance (FCA) discussed in more detail the FCTC and the Illicit Trade Protocol. It was argued that the key aspects of the INB4 negotiations in March will be on how best to control the supply chain. Introduction of tracking and tracing mechanisms, due diligence with respect to the tobacco industry and licensing of entities engaged in the tobacco trade would be important features of the discussions.
Ian Willmore and Dr. Michael Anibueze

It was stressed that the illicit tobacco trade is not just a health issue, but also a development issue - a Protocol is of vital importance to Africa and the rest of the developing world, where tobacco use is rising dramatically. Although there is much work still to be done at INB4, Mr. Willmore was confident that it will be a success, and that a strong Protocol will result.

Dr. Michael Anibueze, Director of Public Health at the Nigerian Ministry of Health, then gave an African perspective to the problems of the illicit tobacco trade. 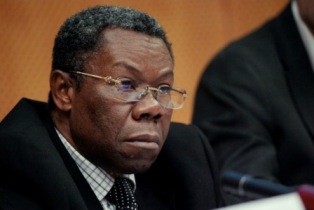 He explained that globally, the illicit tobacco trade affects public health, damages public revenues and finances organised crime. These problems, it was stressed, affect Africa more fiercely than other regions. In some North and West African countries, 80% of cigarettes are from illicit sources. Areas of special challenge to Africa include the prominence of dumping of used manufacturing equipments, trans-shipment making it difficult to track and trace, illegal manufacture of cigarettes, lack of appropriate regulation and enforcement issues. Dr. Anibueze called for international cooperation to make the upcoming INB4 a success, and hoped to establish a strong alliance between Africa and the EU.

Finally, Austin Rowan, Head of Unit at the European Commission's Task Group Cigarettes, European Anti-Fraud Office (OLAF), spoke about the fight against illicit trade through structured cooperation both at European and world level.

After briefly describing the general work of OLAF, Mr. Rowan proceeded to describe a case-study dubbed the ‘Miami case’, which served to illustrate the global nature of the illicit tobacco problem, and the consequent need for global cooperation. Six crates of smuggled cigarettes were seized by Irish Customs in 2002. After investigation by OLAF, with the help of authorities from around the world, the criminals involved were tracked down after a seven year investigation. Mr. Rowan explained that the term ‘international cooperation’ must not be seen as merely aspirational, but as describing a genuine coordinated, international effort.

The following account was drafted by Florence Berteletti Kemp and Sam Villiers who are solely responsible for the contents. Therefore, the views expressed in this section of the report do not necessarily represent accurately those of the panel speakers and participants.

Q: Judith Watt, a tobacco control advocate, asked whether there were any actions against a certain manufacturer based in Northern Ireland (alluding to the Gallaher Group).

A: Austin Rowan replied that although there are a lot of illicit Gallaher cigarettes currently on the market, there are no law suits taking place against them. There is no evidence to suggest that the Gallaher Group (owned by Japan Tobacco International) is acting unlawfully.

Q: Wendy Yared of the Association of European Cancer Leagues asked for examples of what Dr. Anibueze had previously referred to as ‘realistic’ measures to control the supply chain.

A: Dr. Michael Anibueze said that any measure to control the supply chain must be realistic and enforceable. An example would be the introduction of unique, secure and non-removable markings on packs, cartons and master cases. When scanned by the authorities in any country, the unique markings would enable access by means of a link to key information including a list of previous customers, and details of manufacture and shipment.

Q: Cornel Radu, of the European Network for Smoking Prevention (ENSP) explained that in his native country of Romania, illicit cigarettes from Ukraine and Moldova are rife. The problem is so great that tobacco multinational Philip Morris International had to move out of the country. He asked what was being done about this.

A: Austin Rowan said that OLAF is now working closely with law enforcement in Romania. Further, a new OLAF liaison officer has been sent to Ukraine, in order to supply extra support.

Q: David Wiggins, from Smokefree North West, asked what the panel’s views were on a more localised, regional perspective when combating the illicit tobacco trade.

A: Luk Joossens responded that it is generally best to target the suppliers — it is far more difficult to pursue the individual.

A: Austin Rowan argued that the illicit trade needs to be fought at all levels. Unfortunately, there are insufficient resources at EU level to tackle individuals involved, which makes the work of organisations like Smokefree North West incredibly valuable.

A: Dr. Anibueze said that information-sharing is vital, which is what the FCTC is aiming for.

A: Ian Willmore pointed out that even if you have a Treaty and international cooperation, achievements will be limited unless there is action at local level.

Q: Cornel Radu explained that in Romania, authorities do not share information on what happens to illicit cigarettes that are confiscated. Rumours have circulated that they are resold.

A: Austin Rowan said that it is certainly true that Romania does not divulge information on this; however OLAF’s position is that all confiscated cigarettes should be destroyed. All EU Member States follow this and there is no evidence that cigarettes are resold.

Q: Florence Berteletti Kemp, director of the Smoke Free Partnership, asked what the challenges are when attempting to control the supply chains in the various countries.

A: Austin Rowan replied by saying that countries need the will to control their supply chains. This applies especially to countries where there are free zones.

A: Luk Joossens elaborated by saying that action needs to be taken along the supply chain, in manufacturing, transit and destination countries.

A: Dr. Anibueze finished by explaining that the unique markings are absolutely essential in helping countries control the supply chain. 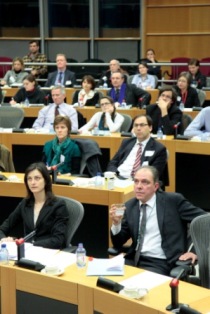 Bart Staes MEP concluded by thanking speakers and participants. He wished Europe and Africa the best of luck in working together for a successful INB4 in March, leading to a strong Illicit Trade Protocol.